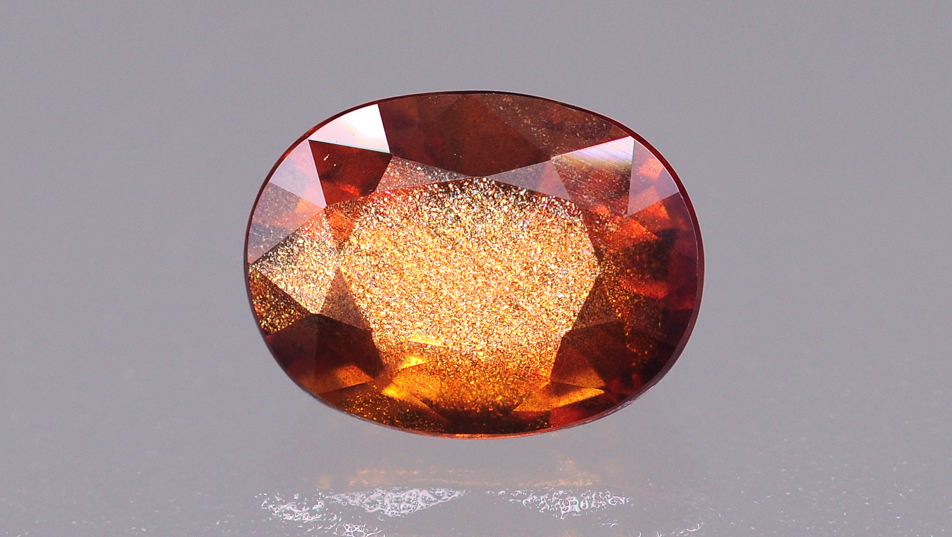 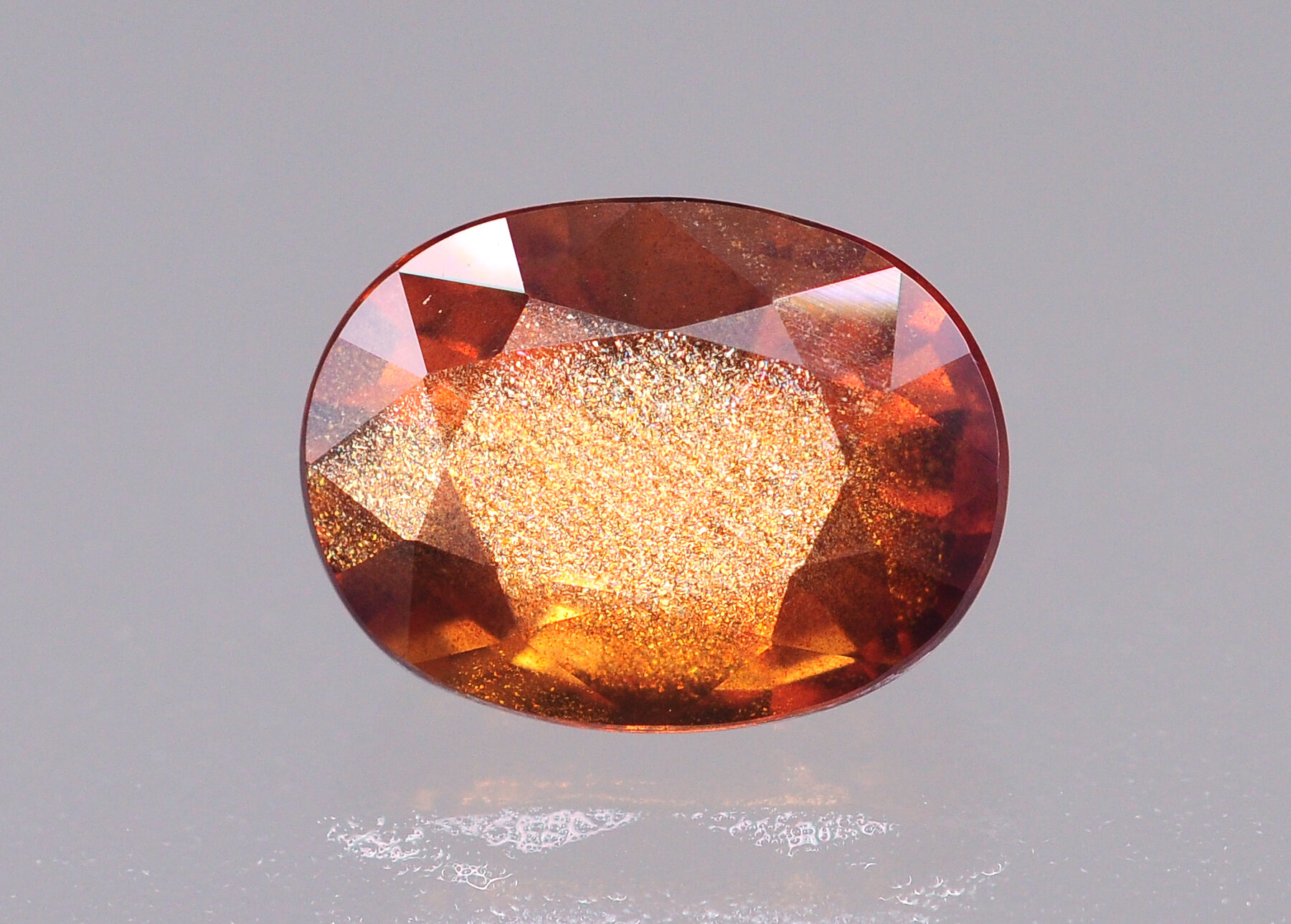 Golden sheen sapphires from Kenya have been reported in this journal and elsewhere (e.g., T.N. Bui et al., “From exsolution to ‘gold sheen’: A new variety of corundum,” Journal of Gemmology, Vol. 34, No. 8, 2015, pp. 678–691; N. Narudeesombat et al., “Golden sheen and non-sheen sapphires from Kenya,” The Gem and Jewelry Institute of Thailand, July-August 2016, pp. 282–288). Those sapphires, however, were the cabochon-quality blue-green-yellow stones that exhibited a shimmering golden effect caused by the light reflection from hematite platelets and needle-like inclusions. No faceted transparent stones have been mentioned in the previous literature. Recently the Gem and Jewelry Institute of Thailand’s Gem Testing Laboratory in Bangkok encountered a faceted orange sapphire with an attractive golden sheen effect that was reportedly from Kenya.

The sample was a transparent, 4.34 ct faceted mixed-cut stone of orange hue with attractive golden sheen effect almost throughout the crown facets (figure 1). Standard gemological testing revealed a refractive index (RI) of 1.765 to 1.775, a birefringence of 0.01 with a uniaxial negative optic sign, and a hydrostatic specific gravity (SG) of 3.98. The stone exhibited brownish orange and greenish yellow pleochroism and was inert to both long- and short-wave UV radiation. Microscopic observation revealed abundant metallic hematite platelets and rutile needles (figure 2, left), confirmed by Raman spectroscopy, that were situated along the basal pinacoid face. A cluster of zircon crystals, as suggested by its crystal morphology, could also be found in the specimen (figure 2, right).

In previous studies, the golden sheen sapphires from Kenya were translucent to opaque, with yellow and blue bodycolor (Bui et al., 2015; Narudeesombat et al., 2016). They contained abundant internal features, such as exsolved intergrowth Fe-Ti oxide phases of hematite platelets and short ilmenite needles that gave the sheen effect, as well as inclusions of goethite, boehmite, and diaspore needles. They also had large surface-reaching cracks. The stone in this investigation is orange, transparent, and without surface-reaching cracks, though it also possesses a significant number of hematite platelets that are in part responsible for its golden sheen effect.

The polarized ultraviolet-visible (UV-Vis) spectra of the specimen displayed predominantly Fe3+-related absorption bands at 378, 388, and 450 nm that are responsible for its yellow hue (e.g., J. Ferguson and P.E. Fielding, “The origins of the colours of natural yellow, blue and green sapphires,” Australian Journal of Chemistry, Vol. 25, No. 7, 1972, pp. 1371–1385), whereas the absorption band at around 557 nm (also at ~410 nm) is caused by a Cr3+ transition contributing to the reddish hue (figure 3). As such, the stone coloration appears orange. R-line luminescence of Cr3+ near 693 nm also appears in the spectra. When compared to the more common non-sheen counterparts, the UV-Vis spectra yield only Fe3+- and Fe-Ti-related absorptions (Narudeesombat et al., 2016).

The energy-dispersive X-ray fluorescence (EDXRF) results of the orange sapphire showed very high content of Fe2O3 (1.94 wt.%) with moderate content of Cr2O3 (0.05 wt.%) and TiO2 (0.04 wt.%). Ga2O3 and V2O5 were equal at about 0.01 wt.%. This result (particularly the iron content) is somewhat similar to those of the common golden sheen and non-sheen stones from Kenya in the previous work (table 1), which also suggests a similar magmatic source. Nonetheless, the Cr2O3 content in this orange sapphire is particularly distinctive, since such an oxide is almost undetectable in most golden sheen sapphires.

While Kenya is known to supply large amounts of golden sheen sapphires, some rare orange sapphires with sheen effect such as this one are also being supplied to the market. Sheen effect makes the stone distinctive compared to common orange sapphire from other sources, for example, from Songea in Tanzania (cf., originating from a metamorphic source and having somewhat lower iron content). However, the owner informed us that this specimen might eventually be subjected to heat treatment at a relatively low temperature to remove some silk-like inclusions and make it more transparent. Nevertheless, careful examination yielded no indication that this stone was heated. Its unique characteristics—heavily included hematite platelets and rutile needles that give rise to the golden sheen effect plus its high iron content—suggest a Kenyan origin.

1. The Gem and Jewelry Institute of Thailand (GIT), Bangkok, 10500 Thailand

Be First to know about new activities and more